It's All About Me
I am 34 years old, which I find so extraordinary, I often have to stop & do the math if asked my age. (Which takes an absurd amount of time, because my math skills? They are Not Good.) My favorite pastimes are reading, shopping, drinking champagne, gazing adoringly at my husband & feeding our cats 'nip. If you would like to commiserate about the total lack of common sense, proper grammar & basic manners in today's society, discuss the lusciousness of George Clooney or tell me that I am, indeed, brilliant, feel free to e-mail me at utterlybrilliant at gmail dot com. If you would like to tell me that I am going to hell, rest assured that I am already aware of that, but thank you for sharing. Everything you need to know about me can be found here:
100 Fascinating Facts About Me.

This is a Flickr badge showing public photos from utterlybrilliant. Make your own badge here.


Made Possible By
Powered by: Blogger
Designed by: Zoot
Site Feed

Weekend Ramblings
To celebrate Chris' birthday & continue his mini-tour of MLB ballparks, we went to the Indians game on Friday. Although PNC Park is still my favorite, Jacobs Field was nice too, & they had fabulous fireworks after the game. I did not enjoy the ridiculous amounts of traffic on 480. Oh, and could someone please explain to me why exit 23 comes between exits 26 & 30? The game itself was fairly uneventful until Choo (whose first name is unfortunately not Jimmy & can you believe my husband has never heard of Jimmy Choo shoes?) hit a homerun in the 6th inning. Then it went right back to being uneventful. As a result, we were able to take a stalker-worthy amount of photos of Seattle's Ichiro Suzuki. I was hoping that the Jake would have some kind of food that's unique to Cleveland, like Pittsburgh has Primanti's, but it was the same old stuff. Although they did have sushi. Does anyone eat sushi at a ball game? No one in Cleveland, I can tell you that much. They had one poor guy working at the sushi stand & I swear he was asleep.

On Saturday, I went shopping while Chris went to take some photos for work. (Mary, I found your Christmas present! That doesn't mean that it won't be sent in January, but I should at least get points for buying it early!) Later, we wandered through a classic car show. I don't want to offend anyone, but 1988 Iroc Z28 is not, I repeat NOT, a classic car. Not even if you wear your best acid wash jeans & listen to Whitesnake when you drive it.

Sunday afternoon, we went to the farmer's market to buy healthy stuff & eat crap. Somehow I think that buying fresh fruits & vegetables compensates for eating something greasy & fattening. Then I washed BOTH cars (I know! I should get an award or something!) and did yard work. I hate yard work. I swear I'm allergic to it. Every time I do yard work, I end up with some kind of rash. Literally. But Chris made wonderful pulled pork / BBQ burgers (I love me some Sweet Baby Ray!) for dinner, and I had ice cream afterwards, so all in all, a good day. Plus, so far, no rash!


No prospects from the showing, by the way. The buyer was unavailable, so the Realtor came to preview the property for him. After going through the entire house & telling me all the things her client would love about it, she ended with: "I can tell you now that the shared driveway will be an issue with him. The last house we went to with a shared driveway, he wouldn't even get out of the car." While we do have a shared driveway, it also has two additional points of ingress/egress from the back of the property. However, I understand that everyone has their "non-negotiables". What I don't understand is why, as a Realtor, you would bother to show a client a property that you already know they are not going to consider. The MLS listing clearly indicates that it has a shared driveway. Grrrrrr.

We have yet another showing on our house tomorrow. I'm trying not to get my hopes up, but I can't help it. We want this so much & it would make such a big difference in our lives. Going home to huddle with St. Joseph & clean & clean & clean.


My Husband Rocks
Last night, I was watching Jaws & eating cheese popcorn for dinner. (This is what happens when I am left to my own devices.) When Chris called to tell me that he was on his way home, I said to him, "Why don't you have a baby blue suit with little anchors all over it?" and he said, "Mr. Mayor! He did have some fly outfits, didn't he?" 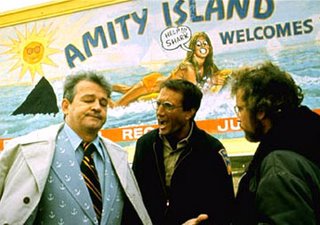 That's why I love him. How many other people would have instantly recognized this obscure pop culture reference? Is it any wonder that I married him?

AND he made me lunch today. WITH CHOCOLATE. I'm so lucky.

Labels: random ramblings, rants and raves, things I have lost (other than my mind)

My house has been on the market for 208 days. For the past 60, I have been in a deep-seated panic that it will not sell.

It is priced right for the condition & area, and is a lovely home that shows well. My friends & family are mystified that it hasn’t sold. So am I, honestly. Unfortunately, it is a buyer’s market, all across the nation. In our small town, in our price range alone, there are currently 30+ homes on the market. To make matters worse, our area’s real estate market has taken a hit due to the economic situation in our region. Not only am I surrounded by competition, very few buyers are able to obtain adequate financing. Since my house has been on the market, only 10 properties have sold in our area in our price range, compared to 25 in the same time frame last year. Of the 16 prospects that have viewed my house, only 2 of them have actually purchased a property, in any community.

As you may have guessed, working in the real estate field has only increased my obsession with selling my house. I check the MLS for “hits” on our house daily, sometimes hourly. I am constantly thinking about what I can do to make our house more attractive to prospective buyers. The answer: nothing. I am offering a home warranty & inspection, plus a bonus to the selling agent. I am marketing the house in various forms of print media, online & on television. Everyone who’s been through it has been very complimentary. The drawbacks that have been mentioned (small yard, “shared” driveway) cannot be changed. It is priced as low as possible; as it is, we will end up taking a loss on it.

There are two things that make the situation especially difficult. The first is that we are under a deadline; the house has to sell within the next few months. When my ex found out that I was getting remarried, he decided to reopen our dissolution agreement. Since this does not in any way benefit him, I can only assume that this is just another attempt to control me. The magistrate has all but called him an idiot, but legally his hands are tied & if the house doesn't sell within the next few months, the magistrate will be forced to send it to sheriff's sale. If that happens, I will be responsible for what is left on the mortgage, which could be as much as $60,000.

The second thing is my job. For several convoluted reasons, I can’t change jobs until my house is sold. And my work environment is, in a word, toxic. I spend virtually the entire work day in varying degrees of tension and irritation. Most days, I am physically & emotionally drained by the time I get home. (Thank God I have Chris to come home to!) I also don't have medical insurance there, which means Chris & I are delaying our plans to have children indefinitely. Since my (gasp!) 34th birthday is around the corner, this delay is not insignificant. I've also had some health problems this year, and feel like I'm teetering on the edge of a cliff every day that I don't have insurance.

Note: Everything is all snuggly & catnip-coated in Lemieux's world again. Another crisis averted!

Labels: must. sell. house., rants and raves, the office 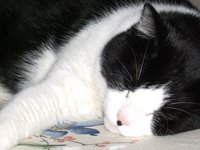 This is our fat cat, Lemieux. He's, well, not normal, but we love him. Yesterday, Lemieux apparently climbed up onto the back of one of our living room chairs & managed to knock a vase filled with dried palm fronds from the mantle onto the floor, whereupon he evidently considered it his own personal smorgasbord. Perhaps this is a sign he needs more fiber in his diet. In any case, since then, he's been vomiting, lethargic & not eating. Yes, that's right, I said NOT EATING. For a 22+ lb. cat, that's serious business. Lemieux is, obviously, a gourmand whose definition of "food" is rather fluid. Kitty treats, French fries, cereal, ribbon, lint, bugs . . . it's all yummy to him. This time, though, there have been repercussions to his gluttony.

I do not consider myself a Crazy Cat Person. I do not take my cats with me wherever I go, I do not dress them up in little outfits, I do not take them to have their photo taken with Santa Claus & I do not buy my mom needlepoint pillows that say "My Grandchild Is a Cat". (You're welcome.) But that doesn't mean that our cats aren't part of the family. And when someone in your family is sick, you worry.

I worry like Lemieux eats - with reckless abandon. While logically I know that he ate something he shouldn't & now has a tummy ache, that doesn't keep my twisted little brain from thinking, "what if those palm fronds had some kind of chemical on them & he's been poisoned?" or "what if they get wrapped around his intestinal tract & he dies?". In my mind, it is always The Worst Case Scenario. God, I hope I can get some kind of Xanax drip prescribed before we have kids. 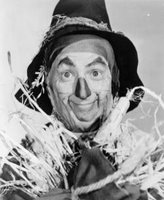 My boss is wandering through the office, whistling "If I Only Had a Brain" from The Wizard of Oz.
"Some people without brains do an awful lot of talking, don't they?"

Welcome to the world, Caleb James! 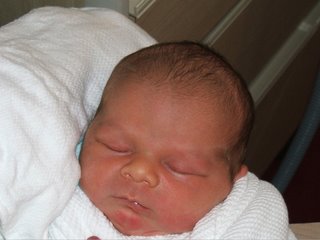 Next up is a mini-trip to Pittsburgh for a family wedding, then to Cleveland to continue Chris' tour of MLB ballparks. I know you're jealous. Breathtaking details will follow!